"WHY, THE LONG NOSE!" VALROUZ WINNER IN PHOTO FINISH AT PAKENHAM 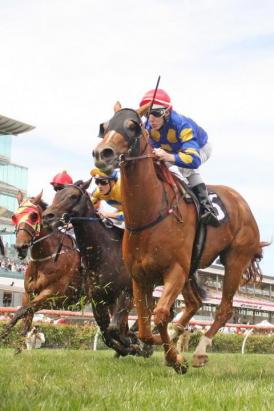 Claiming the win in a photo finish at Pakenham was the Doug Harrison trained mare Valrouz.

Digging deep and fighting back hard, Valrouz had the goods at Pakenham to win the BM64 1200m.  It was an emphatic win for trainer Doug Harrison who describes the 8 year old mare as "one of the toughest horses he has ever come across."

"She has been plagued with feet problems, which we are just about on top of, but she just gets out there and gives it her all."

Out of Fayrouz by Elvstroem, Valrouz jumped away evenly and had to do the work early to get across from the wide barrier.  Settling on-pace, the mare picked up down the straight to show her customary fight to the line attitude and just doesn't give in.  Beautifully ridden with the claim by Stephanie Thornton, congratulations to Doug Harrison who owns the mare.

Another of Fayrouz's progeny in Redrouz ran an excellent race first up earlier in the night, finishing off very well to grab second.  Possibly looking for further distance, the half sister to the talented Valrouz should really be hitting her straps over 1400m next start to break claim her maiden win.